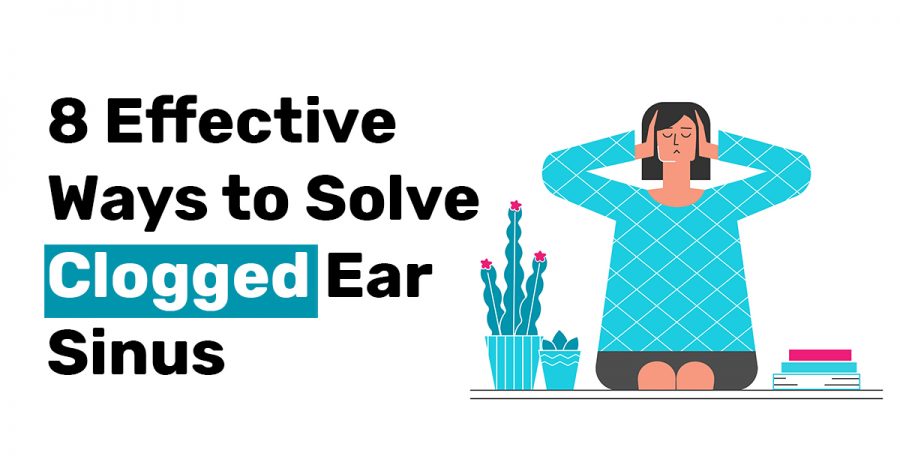 It is a drug that relieves clogged sinus. You might be wondering why to use a nasal decongestant for your clogged ear sinus. It is because the sinuses of the nose and ears connect.

Block one of your nostrils while blowing the other nostril with a light amount of pressure. It would get rid of the blockage. However, it is advisable not to blow your nose too hard because it might affect your eardrums.

Improve breathing by doing this. It will also get rid of the mucus around the ear and nose cavities. Include this in your hygiene routine to make sure that your sinuses are free from any blockage.

4. Use a humidifier and diffuser.

Places that are not humid enough could worsen your clogged ears. Hence, you can use a diffuser with essential oils to relieve your sinuses. Use essential oils such as peppermint, eucalyptus, and tea tree oil. It may help in reducing the sinuses and fights the bacteria causing the sinus infection.

Tobacco smoke irritates your sinuses, leading to a clogged ear sinus. It may also be the cause of a sinus infection to stir up. Avoid places that expose you to tobacco smoke.

It is vital for the human body to drink lots of fluid. There are a lot of benefits of being hydrated. An example is it will keep your sinuses from drying out.

Because of the change in air pressure, it is helpful if you wear earplugs during flights. It protects your ears from getting clogged. It could also protect you from loud noises while on-air. Wear it during takeoff and landing.

Places with high temperatures will worsen the inflammation of your sinuses.

Fluid build-up happens when you are in the shower or swimming, and the water is getting inside your ear. You may feel fluid in ear symptoms like ear pain and ringing in the ears. You’ll also hear the sounds in the environment muffled and a feeling of fullness in your ears. Some conditions have the same as the fluid in ear symptoms like middle ear infections and ear drainage. If you or your child have these signs, go to a specialist.

Earwax has a purpose. It is to moisten and protect your skin inside the ear. It does not harm if you do not remove your earwax only if it causes symptoms of clogged ears.

Things avoid that causes the build-up

Moreover, allergies cause mucus to build up in the sinuses. It causes the canal between the nose and the middle ear to clog.

During air travel, there are changes in air pressure. So, the middle ear and eardrum become stressed.

Colds allow the build-up of mucus in your sinuses, making it hard for you to breathe through your nose. You might also feel pain in some parts of your face. Every time you have a common cold, you hear muffled voices. It causes the ear sinuses to clog and lead to sinus infection. You might also feel a little dizzy due to the blockage.

It is not advisable to expose yourself to tobacco smoke if your sinuses are sensitive. Tobacco smoke might cause your sinuses to inflame. Also, do not go near someone who is smoking. A clogged nose is not that serious, but it could make you uncomfortable. The good thing is there are easy ways to solve this problem.