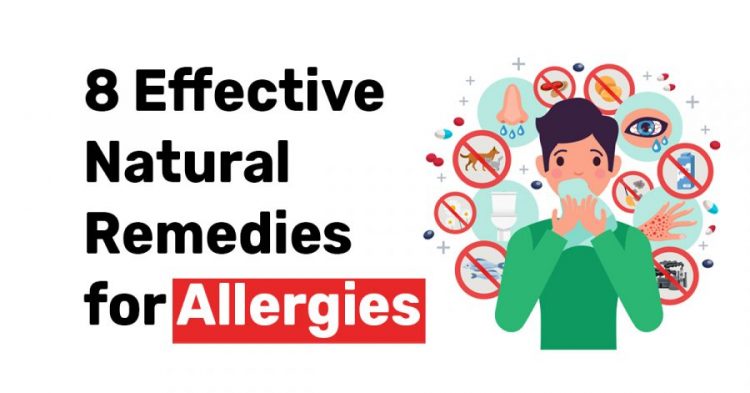 People of all ages may be affected with allergy attacks and the most common quick relief to allergic symptoms is with the use of an over the counter antihistamine. An antihistamine works by blocking the effect of histamine which is protein produce by the immune system once it detects a foreign substance. This will trigger symptoms such as rashes, itchiness, sneezing, vomiting, diarrhea, and many more. It is good to know that there are natural remedies for allergies in case antihistamine drug is not available.

Drugs for allergies can cause side effects for some people like drowsiness and nausea. This is the reason why many result in natural allergy relief. This article will provide you with several options in case you do not want to take OTC drugs for allergy.

Vitamin C has a lot of beneficial uses aside from immune boosting. It can act as a remedy for allergy. This is according to a study conducted in 2018 about the effectiveness of vitamin C for treating allergies. They found out that allergic reactions are also caused by oxidative stress and this vitamin is a potent antioxidant that can stop the anti-inflammatory response of the body hence block the production of histamine.

Another later study in 2000 said that taking 2 g of ascorbic acid a day can act as natural allergy medication. This nutrient is abundant in fruits and vegetables, but you can also take it as a form of a supplement.

This is not a dairy product but a plant extract that comes from a shrub that usually cultivated in Asia, Europe, and other regions of North America. Many years ago, it is being used to remedy hay fever, migraines, and allergic rhinitis. The National Center for Complementary and Integrative Health said that butterbur can be used as a treatment for allergies.

People need to become aware that a large amount of butterbur can trigger side effects in the body, according to NCCIH such as difficulty in breathing, drowsiness, fatigue, diarrhea, itchiness, and headache. Also, raw extract from butterbur may cause damages to the liver because of its alkaloid content.

This is a type of enzyme that is not hard to find as it is available in the core and pineapple juice extract however, it is also available as a supplement. Bromelain in pineapple juice is also used as a natural cure for inflammation in the sinus and as post-surgery treatment. A research conducted in mice found out that bromelain can act as a treatment for allergies because of its anti-inflammatory properties. Some people are allergic to pineapple and can cause adverse side effects such as stomach upset and elevated heart rate.

Taking probiotics is known as natural remedies for allergies as it can help in maintaining balance in the gut and promote good bacteria. The main function of it is the fact that it can boost immune system function.

This is a plant compound known as a flavonoid and many researchers found out its effectiveness for allergy relief. According to many studies, quercetin has an antihistamine property. In an animal study, they found out that this plant compound can decrease inflammation of the airways. However, there is not enough evidence according to NCCIH to prove its efficacy for treating allergies. There is no harm in trying as quercetin is abundant naturally in apples, broccoli, grapes, berries, green tea, and red onions. Also, quercetin is generally regarded as safe according to the FDA.

The use of natural locally produced honey as a treatment for allergies is a theory base. The theory suggests that consumption of honey can later on lower the risk of allergic reactions to pollen that bees carry and use to make honey.

One study in 1998 proved that peppermint oil extract can offer anti-inflammatory effects to decrease symptoms of bronchial asthma as well as allergic rhinitis. This essential oil can be used with a diffuser but carrier oil is needed in case you will apply it as a topical medication.

7 Signs and Causes of Peptic Ulcer