7 Facts about Antiretroviral Therapy You Should Know 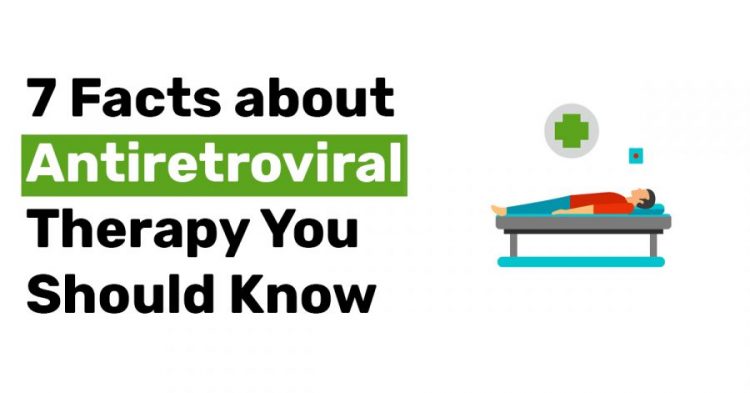 Antiretroviral therapy or ART is medical care for fighting HIV (human immunodeficiency virus). People diagnosed with HIV can undergo this medical intervention. ART is carried out by consuming several HIV medicines each day, a routine known as the “HIV treatment regimen.” Antiretroviral therapy is not an absolute cure to AIDS but a medical care given to prolong HIV-positive people’s lives and help them stay healthy. ART can also inhibit transmitting HIV further. ARTworks by decreasing a patient’s viral load until it reach the undetectable state. A viral load test determines whether a patient has an undetectable viral load, which means very little HIV in the body. Maintaining an undetectable viral load allows individuals to have safe sex with zero possibility of infecting their loved ones.

If someone suspects themselves of contracting HIV, they should consult their doctor to take appropriate medicines immediately. This emergency action is called PEP HIV. Post-exposure prophylaxis or PEP prohibits acquiring the virus by taking antiretroviral drugs under 72 hours of contact with HIV. PEP is administrated to individuals who believe they have contracted HIV by sex or needles. It can also help individuals who have been sexually assaulted.

The positive outcomes of ART depend on the medications involved. Doctors combine three or more drugs for this anti-HIV therapy to be effective. More pills will allow the substances to combat the virus and decrease its quantity in the blood. If consuming many drugs is difficult, a patient can request a single capsule with the prescribed medicines.

ART prohibits HIV from progressing to AIDS. ART inhibits HIV from increasing its count in the blood. It allows for a lowered viral load, which comes with a minimized risk of spreading the virus. Antiretroviral therapy multiplies the immune cells called CD4 that attack HIV. By increasing CD4, the body’s defense structure gains an opportunity to recover and create more immune cells. More immune cells mean a better ability to combat infections brought about by HIV and a heightened survival rate for the patient.

3. Post-exposure prophylaxis is an emergency procedure

PEP HIV or consuming antiretroviral drugs in less than 72 hours of HIV contact is only advisable for emergency cases. It is not an alternative to other HIV precautionary actions like wearing condoms properly and owning personal needles instead of sharing.

4. Patients should receive antiretroviral therapy as early as possible

The perfect time to undergo an anti-HIV treatment should be as soon as you can. Taking medications immediately after being diagnosed will lessen progression and complications. Mainly, patients experiencing AIDS and HIV-positive pregnant women should start medical care as quickly as they can.

5. HIV treatment regimen is based on unique personal demands

Doctors use various drugs to treat HIV. Medications for HIV therapy are classified into seven types based on their combat system against HIV. Doctors tailor a patient’s HIV regimen according to their condition and needs. The process of selecting an HIV regimen includes a rigorous deliberation between the patient and the doctor. Various factors must be taken into accounts, such as conceivable medicine interplay and probable side effects.

6. The advantages of ART are more significant than the side effects

Like other drugs, the ones used in HIV therapy may also cause unpleasant effects. A few side effects can be grave, but the majority are controllable. In general, consuming HIV medications have more advantage than disadvantage. New and improved drugs possess lesser undesirable effects than old medicines.

Patients with HIV may suffer from several symptoms that deteriorate their health. By undergoing treatment and regularly taking medications, a patient can recover and lead a healthier life. A healthy life is close to happiness as people can enjoy their usual life routine and achieve a high quality of life. ART also prevents the spread of HIV, which means that HIV-positive people can engage in sexual activities with their partner without feeling anxious.

Although antiretroviral can help people infected by HIV to get back to their everyday lives and be healthy, it is vital to take precautions to avoid infections.

8 Interesting Facts about Pain That You Should Know