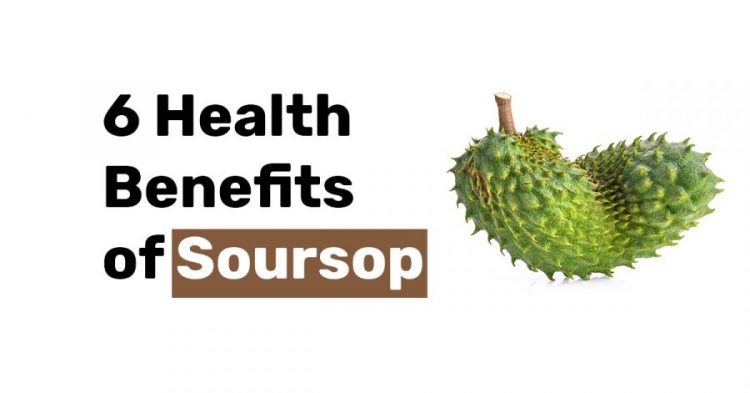 Soursop or also known as Graviola is mostly cultivated in tropical regions in the world. It is a heart shape fruit, has green outside covering, and a white and soft flesh inside. Its flesh is pulpy and has a sweet and sour taste with inedible black and shiny seeds that are toxic. You may also find seedless soursop available in the market and its flesh is more fibrous. The fruit is being used for many culinary purposes such as fresh fruit juices, shakes, ice cream, and many more because of the health benefits of soursop many are interested to include it in their daily diet.

Soursop is best eaten raw but it is also processed by boiling to create sweetened Graviola. Since the fruit is already sweet, a little sugar is added while boiling until it thickens. The fruit varies in sizes but it is typically one of the largest fruit so it is divided into several portions. One serving of the fruit or 100 grams is very low in calories and high in essential nutrients, vitamins, and fiber. Soursop benefits come from its fruit, stem, and leaves. In traditional medicine, the leaves and stems are used to treat different ailments. It has been the subject of many types of research like animals and test-tube studies done to find out how it can help in inflammation and growth of cancer cells.

Soursop tea benefits are due to its high concentration of antioxidant compounds that is beneficial in neutralizing the effect of free radicals in the body. These free radicals can do great damages to healthy cells. A test-tube study was done to find out the effectiveness of Graviola against cell damages from free radicals. Another similar research found out that antioxidants in the fruit extract show promising results in preventing cell damage. Some of the antioxidants that were found effective are quercetin, luteolin, and tangeretin. However, more human research is needed to find out its effect on human cells.

Most of the studies related to the health benefits of soursop to cancer are done in test tubes, but most of them are successful in finding out the potential use of the fruit in eliminating cancer cells. A test-tube study done in breast cancer cells applied with soursop extract. Surprisingly, it is successful in reducing the size of the tumor, destroy cancer cells, and boost the immune system response.

Also, a similar study has done in leukemia cells and the effect of the soursop extract. They are able to document the effect of the extract in suppressing the growth and progression of cancer cells. However, medical professionals encourage more scientific research to know the benefits of eating the fruit to humans and cancer cells.

Soursop tea benefits are also linked to its antibacterial properties. A test-tube study using extract in different concentration are used in diverse types of bacteria that cause oral problems. The result shows how effective Graviola extracts in eliminating different strains of bacteria that can cause a yeast infection, gingivitis, and tooth decay.

Another promising test-tube study was done using Staphylococcus and cholera bacteria. Extract from the fruit was used and showed great results against these bacteria. However, most test tube studies are using highly concentrated extract and it is far from actual serving that one can get by just eating the fruit. Human trials and studies are needed to get actual results using the fruit in the diet.

Animal studies were done to get substantial evidence and data on the effectiveness of Graviola in fighting inflammation. Inflammation is the body is a natural response by the immune system to injuries, but chronic inflammation is related to developing dreaded diseases. One study was done in mice and use soursop to treat inflammation. It resulted to reduce swelling and inflammation.

Another study to prove soursop benefits acquire the same findings that the fruit helps in reducing swelling by 37 percent in mice.

Many animal studies are linked to soursop tea benefits in regulating blood sugar levels. In a study conducted in rats with increased sugar, they were given an extract from Graviola for two weeks. The result shows a substantial decrease in blood sugar levels that are five times lower than the group who does not receive the same treatment.