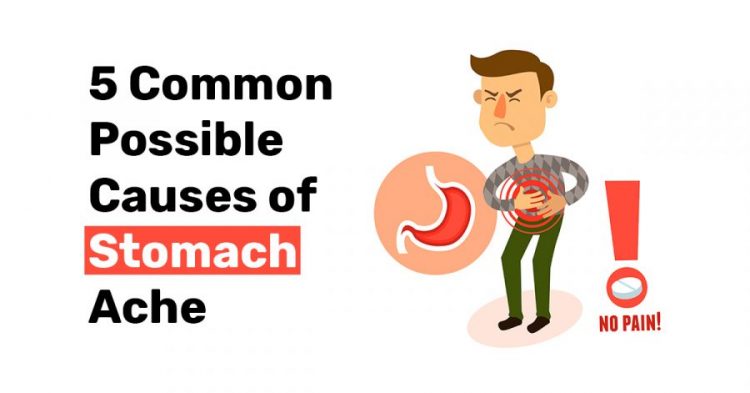 Stomach ache is a common term used by people suffering from abdominal pain. It is characterized by painful cramps with different levels of severity from mild to very sharp cramps. Normally, a stomach ache will not last for several days and does not cause for panic. Severe and sudden pain in the stomach should be treated immediately as a medical emergency. There are diverse possible causes of stomach ache. It is important to know about these causes to quickly find out what might cause the pain you felt in your stomach.

Indigestion or also known as dyspepsia is characterized by a feeling of fullness and uncomfortable sensation in your tummy. Stomach ache after eating can happen for people with indigestion problems. Aside from these symptoms, one can also feel a burning sensation that can happen in the upper part of the stomach. This symptom is a sign of other underlying conditions such as gastroesophageal reflux disease or GERD, ulcer, and disease in the gall bladder.

This stomach upset is very common for some, but some are more prone to indigestion like people suffering from diabetes, pancreatitis, irritable bowel syndrome, thyroid diseases, and very rare stomach cancer.

Certain types of medication can also promote a tummy ache such as steroids, aspirins, some antibiotics, birth control pills, and thyroid medications. People with a poor lifestyle like eating too much, stress, smoking, and excessive alcohol intake can also lead to indigestion.

Constipated individuals are suffering from the inability to release bowel or a difficult bowel movement and most of the time it is not a serious case. The frequency of bowel may vary from one person to another. Some individuals experience it three times a day while others normally do four times a week. It is important to observe your regular bowel movement so you can immediately know if there is a change in your bowel habit. Not having bowel movements for three or more days are causes of stomach ache that leads to hardening of the stool. Most of the common causes of constipation are sedentary lifestyle, sudden dietary changes, pregnancy, lack of fiber and water in the diet, stress, and overuse of laxatives.

Gastroenteritis is characterized by an inflamed stomach and intestines that cause a tummy ache. The most common cause of this condition is a bacterial and viral infection. Extreme pain in the stomach is accompanied by diarrhea as well as vomiting, while other people also experience fever and headache. This health condition can be transmitted from human to human through close contact with someone infected with viruses or bacteria, consuming contaminated water or food, and poor hand washing practices before and after using the toilet.

Gastroenteritis can be caught through a virus called norovirus. Although it is rare, people who are infected can experience a severe case of gastroenteritis. Aside from that, some may get it from bacteria such as salmonella and campylobacter.

Irritable bowel syndrome can occur in people with diverse symptoms that include stomach upset, diarrhea, bloating, and constipation. This condition can lead to intestinal damages that can greatly affect people’s wellbeing. Even with the latest breakthrough in the medical industry, the main cause of IBS is still unknown but according to health professionals, it is triggered by the sensitivity of the immune system and the colon.

Food poisoning can cause a stomach ache after eating food or drinking water contaminated by bacteria and other harmful microorganisms. It can happen if a person ingested a toxic substance, spoiled or contaminated foods and water that can lead to symptoms such as diarrhea and vomiting. Food poisoning is triggered by several factors such as bacteria (E. coli, C. botulinum, listeria, and Campylobacter), parasites, and viruses (rotavirus, norovirus, astrovirus, and sapovirus). People who are in unfamiliar places are advised to be cautious in drinking tap water.

Seek for doctor’s advice in case the stomach upset or pain does not go away especially after several days or if it hampers your daily activities. There are some cases that one should immediately seek medical treatment such as bloody stool, vomiting of blood, swelling, very high fever, and difficulty in breathing.

10 Effective Meningitis Treatments You Should Know