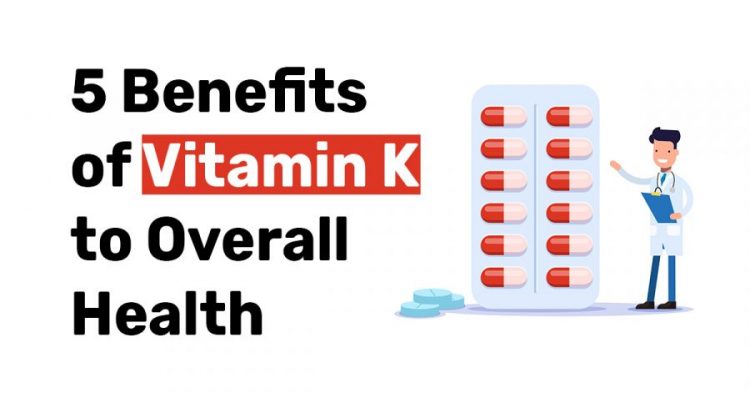 The benefits of Vitamin K are related to its important role in bone metabolism, blood clotting, and regulating blood calcium levels. It is a fat-soluble vitamin that is available in the diet in two different forms. First, is the phylloquinone or Vitamin K1, mostly found in green leafy vegetables such as kale and spinach. Second is the menaquinones or K2 typically found in fermented foods, animal foods, and produced by bacteria in the human body. Vitamin K1 is the most common Vitamin K supplement in the U.S. Vitamin K uses to treat certain diseases like osteoporosis, and steroid-induced bone loss.

Vitamin K deficiencies are common in newborn and it is rare in adults. For those people experiencing Vitamin K deficiency are unable to properly absorb the Vitamin K made naturally in the intestinal tract. Despite the many benefits of Vitamin K, there are negative side effects that you need to keep in mind. Some side effects of Vitamin K2 are associated with loss of appetite, difficulty in breathing, it can cause enlargement of the liver, and many other health-related issues.

Production of proteins in bones needs Vitamin K such as osteocalcin that is needed to prevent the weakening of bones. Vitamin K benefits are it improves bone density, supports the maintenance of strong bones, and decrease the risk of bone fractures. There is a study that shows a higher intake of Vitamin K can lower the incidence of hip fractures and low bone density. According to the Nurses Health Study, women taking at least 110 mcg of Vitamin K per day are 30% less likely to break a hip compared to those women who take less than that. There is another research shown that Vitamin K has a positive effect on mineral density. Vitamin K uses is for treating bone problems like osteoporosis or bone fractures.

Vitamin K benefits are associated with reducing the risk of heart diseases. It also plays an important role in maintaining the normal functioning of the heart. It is vital to know that vitamin K and protein work together. Vitamin K needs protein to activate and help prevent calcium from depositing in arteries. The calcium that is deposited in arteries contributes to the development of plaque that can lead to the development of heart ailments. Some research shows that Vitamin K2 is better than K1 at reducing these calcium deposits and lowering the risk of heart disease.

The positive side effects of vitamin K2 are the decrease recurrence of certain types of cancer. In Western countries, cancer is the number one cause of death. This is despite the breakthrough of modern medicines new cases are still arising. A research study done in 11,000 men significantly showed that high Vitamin K2 intake shows a 63% lower risk of prostate cancer compared to Vitamin K1 that has no significant effect. Aside from vitamin K uses, too much intake of Vitamin K2 may lead to body swelling, muscle stiffness, paleness, and enlargement of the liver.

There are types of protein that are responsible for blood clotting that depends on vitamin K. Blood clotting is vital to stop excessive bleeding that might end up to massive blood loss. Vitamin K benefits can counteract the effects of blood-thinning medication. Some people experiencing blood clotting disorders are advised to stay away from a certain drug called warfarin as this is known as a blood thinner. It is advisable that when taking warfarin eating a consistent amount of Vitamin K from food and supplement is needed. There is a study that shows a single serving of natto is rich in Vitamin K2 and can greatly increase blood clotting markers of the body.

8 Interesting Facts about Pain That You Should Know